On May 4, 2018, Gov. Tom Wolf signed into law House Bill 866. Now Act 18 of 2018, the law marks the culmination of a four-year effort by Rep. George Dunbar, CPA (Inactive) (R-Westmoreland) and the PICPA to address inconsistencies and the potential for double taxation on the local earned income of Pennsylvania residents.

“What a difference 18 months make,” Dunbar told me after hearing from the governor’s staff that he would be signing the bill. 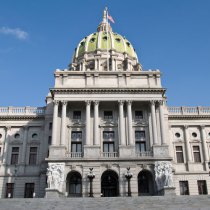 Dunbar was expressing our collective relief that Wolf signed the legislation that Dunbar and the PICPA worked so hard to get onto the governor’s desk for a second time. We had been down this road last session when, despite overwhelming support in both chambers (148-42 in the House and 36-12 in the Senate), Wolf threw us an unexpected curve.

In November 2016, the governor shocked many in the capital when he inexplicably vetoed similar legislation (House Bill 245), also sponsored by Dunbar. Wolf based his veto on some misinformation (I’m being kind) from certain interest groups about the impact of the bill on school districts. Wolf noted in his veto message that his opposition was because the legislation “would cause even a limited number of school districts to lose revenue,” and requested “a modified version of this bill that does not negatively impact the finances of school districts.”

Getting any bill through the legislative process and onto the governor’s desk is never easy. Groups go years between getting bills signed into law. Doing it a second time with largely the same bill is rare and doubly hard. I don’t think people appreciate or understand the inherent difficulties in the legislative process. There are so many variables at play—from interchamber personality conflicts to the gauntlet of stakeholders who come out of nowhere to oppose legislation—and any number of which can easily derail the effort. It’s much easier to kill a bill than it is to pass one. It’s a never-ending game of whack-a-mole. Smack down one issue, and another immediately pops up. Perseverance and patience are important traits if you want to be successful in the legislative arena.

This time, with our rare second opportunity, we left nothing to chance. Knowing what Wolf’s primary concerns had been in the past, we set out to counter the misinformation with hard facts. That’s what CPAs do. We did this by preparing a comprehensive chart of the fiscal impact that House Bill 866 would have on each school district throughout the state. Our analysis found that only two school districts (both in Lancaster) would be adversely affected by the bill.

Next, we set out to secure passage of House Bill 866 with even stronger voting majorities than what we achieved with House Bill 245. We did that in spades. House Bill 866 passed the House in June 2017 by a vote of 189-0 and the Senate this past April by a vote of 44-6. We targeted those who voted no on House Bill 245 through individual meetings where we explained the ramification of their no vote (that their constituents could be subject to double tax at the local earned income tax level).

Finally, we needed to secure the governor’s support. In January, PICPA members Dave Caplan, Cheri Freeh, and Jim Newhard and I met personally with Wolf. Our goals were to give him a better understanding of the key provisions in House Bill 866, explain why they were important to taxpayers, and dispel the inaccurate information he was provided about the bill.

In the end, our message that House Bill 866 protected taxpayers from double taxation while streamlining the collection process proved effective with both the governor and state lawmakers. Our game plan was strong and our legislative allies, chiefly Dunbar and state Sen. Pat Browne, CPA (R-Lehigh), never gave up. Our persistence paid off, and Act 18 takes effect July 3, 2018.

One of the easiest ways to show your support for George is by placing a free sign in your yard. As always, Dunbar delivers! Send us your address we will bring a sign to your door.